The Jewish festival of Hanukah and Christian Christmas have more in common that is generally believed. That is why, for the third time, we invited Kielce residents to participate in extraordinary, two-day retreat led jointly by a rabbi and a Catholic priest. The retreat sermons were preached by Rabbi Stanisław Wojciechowski from Warsaw’s Ec Chaim Progressive Synagogue and Fr Grzegorz Michalczyk, national chaplain of creative circles, rector of St Andrew the Apostle and Albert Chmielowski Church in Warsaw. On the second day of the retreat a biblical service was held at the university church of St John Paul II at 54 Wesoła Street in Kielce. The service was conducted by the retreat preachers, Fr Rafał Dudała, rector of the church, and Bogdan Białek, president of the Jan Karski Society. 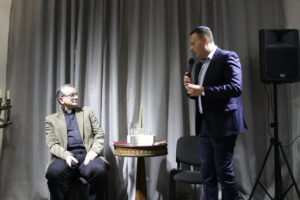