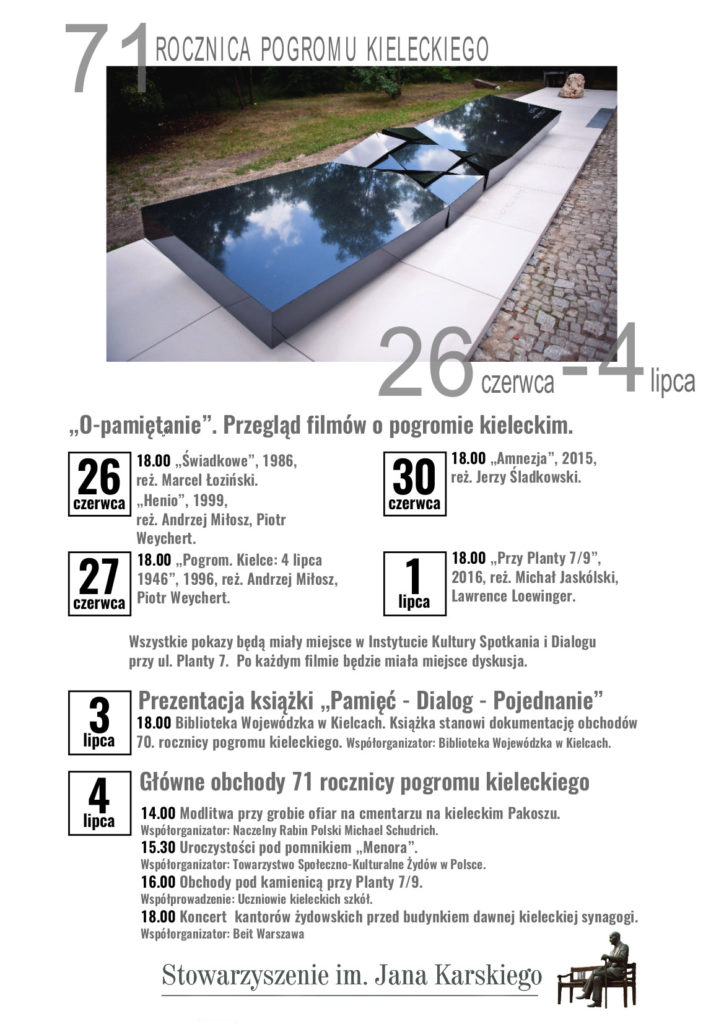 Various groups and societies took part in the organization of this year’s anniversary. A prayer at the Jewish cemetery in Kielce, recited by the Chief Rabbi of Poland, was joined in by representatives of different religions and faiths. Various Jewish communities co-organized ceremonies at the Menorah monument and in front of the former synagogue in Kielce. Celebrations at 7 Planty Street were prepared by young residents of Kielce.

The main celebrations of 4 July were preceded by two events. From 26 June to 1 July, a review of films on the Kielce Pogrom entitled ‘O-pamiętanie’ [Awakening – Remembering] was organized. Five films were presented. The oldest ones, ‘Widzowie’ [Witnesses] by Marcel Łoziński (1986), ‘Pogrom. Kielce: 4 lipca 1946’ [The Pogrom. Kielce: 4 July 1946] (1996) and ‘Henio’ (1999) directed by Andrzej Miłosz and Piotr Weychert, are the accounts of witnesses and victims of the tragedy.

Two recent films, ‘Amnezja’ [Amnesia] (2015) and ‘Planty 7/9’ (2016), are a reflection on memory and on the path to reconciliation. The screenings were also an opportunity for discussion, leading to a lot of excitement – one older man from the audience, who seemed very moved, said that one of the films about the Pogrom brought back memories and images of the pacification of his village, which the man witnessed as a child.

On 3 July, at the Witold Gombrowicz Regional Public Library, the promotion of the book ‘Pamięć – Dialog – Pojednanie’ [Memory – Dialogue – Reconciliation], which records the events related the 70th anniversary of the Kielce Pogrom, took place. A meeting with Bogdan Bialek, president of the Jan Karski Society, was conducted by Magdalena Smożewska – Wójcikiewicz, a journalist from Radio Kielce. ‘Reconciliation is not an act of justice. What does it mean? It means no preconditions. Reconciliation is reaching out to others. Last year, Rabbi Michael Schudrich said that reconciliation means doing something together – that is reaching out to others’, said Bogdan Białek.

Traditionally, the first part of the main celebrations took place on 4 July at noon at 7 Planty Street. Flowers were laid by the mayor of Kielce, Wojciech Lubawski, representatives of the President of the Republic of Poland as well as the Świętokrzyskie Region voivode and local government institutions.

The main celebrations, co-organized by the Chief Rabbi of Poland, Miacheal Schudrich, began at 2 p.m. at a Jewish cemetery in the Kielce district of Pakosz. Before reciting prayers, the Rabbi said that when pain is so intense that it cannot be expressed in words the only thing that we can resort to is prayer. Representatives of various religions and faiths took part in the prayer at the cemetery, each of them reciting prayers in their own tradition: Secretary of Supreme Council of the Muslim League in Poland, imam Abdul Jabbar Koubaisy, a Buddhist monk, Michał Czernuszczyk, representing Kannon Zen Community of Warsaw, Fr. Michał Jabłoński, pastor of the Evangelical Reformed parish in Warsaw and Catholic priests, Fr. Mirosław Cisowski, delegate of the Bishop of Kielce, who assured of his spiritual presence, Fr. Wiesław Dawidowski, minister provincial of the order of St. Augustine in Poland, Fr. Jan Oleszko, rector of the church of the Karczówka monastery in Kielce, and Fr. Jacek Kopeć, head of Catholic Schools of the Kielce Diocese. ‘We Christians, Jews, Buddhists, Muslims and atheists remember today the cruel time when blood dropped in price. We are looking with pain at the present times, searching for the hope for future without hatred and contempt’, said Bogdan Białek.

The ceremony at the Menorah monument was led by Artur Hofman, president of the Social and Cultural Society of Jews in Poland. As he pointed out, that institution continues the work of Jewish committees established after World War II, one of which had its seat at 7 Planty Street in Kielce. At the monument dedicated to the Kielce Jews, victims of the Holocaust, Hofman reminded us that both the Holocaust and the Kielce Pogrom had the same source, which was hatred. Then, in this special place that witnessed the executions of the Kielce ghetto’s residents, Jewish melodies were played on the violin.

The event which took place at 7 Planty Street, organized by young residents of Kielce and led by Anna Brzezińska, a 16-year-old junior school student, was very moving. The young people read out the inscription from the grave of the Pogrom’s victims in four different languages and then prayed with the words of psalms. The prayer was followed by a heartrending testimony of one of the victims of the 1946 events. While reading out the names of the victims, the young people were writing them with chalk on the pavement in front of the building and then lit candles. The youngest victims of the Pogrom, pupils of the Ichud Kibbutz who were preparing to leave Kielce for Palestine, were also commemorated. Short biographies of three of them were read out and then a well-known Jewish lullaby in Yiddish was sung. This part of the celebrations was particularly moving for Rabbi Michael Schudrich, who said: ‘The victims of the Pogrom were rather of your age than mine. However, you give hope to all of us’.

A concert by an American female cantor and music educator, Cindy Paley, and a member of Klezmaholics band, Piotr Mirski, was the last part of the anniversary celebrations. The concert, which took place in front of the former synagogue in Kielce, was conducted by Rabbi Haim Dov Beliak. Before the event, Vir Bonus prize was awarded to Robert Kotowski, director of the National Museum in Kielce. Bogdan Białek referred to the Museum of Dialogue, a unique and remarkable work of Kotowski, described by the prize winner as a modern and interactive meeting place. This modern facility is a place where views and experiences can be shared freely, learning about other cultures and deepening understanding about one’s own heritage.