The events associated with the 72nd anniversary of the Kielce pogrom began with a meeting with Kristof Bień, the author of the graphic story “The Nation Chosen” and the opening of the exhibition showing a fragment of the work that took place on July 1, 2018. – It is important that this is a comic book, because now that the last witnesses of the Holocaust have passed, we no longer know how to talk about these events. They knew – they were telling their stories, telling their lives and emotions. How to talk about it now? Which language? – said Bogdan Białek, introducing the meeting. Grzegorz Kozera, the Kielce prose writer and poet also told about the presented fragment story by Kristof Bień. He is the author of the comic book himself and revealed that he is working on a graphic story about the Kielce pogrom in a similar style.


The second meeting, which took place on July 2, concerned the book “Dalej jest noc. The fate of Jews in selected poviats of occupied Poland. ” The guests of our institute was prof. Barbara Engelking, author of one of the chapters and co-editor of the entire publication and prof. Dariusz Libionka, who also developed the history of one of the poviats. Both of them are employees of the PAN Research Center for Holocaust Studies, which was the co-organizer of the meeting. The conversation, conducted by Bogdan Białek, enjoyed great interest: the Institute was filled to the brim and several hundred people watched the Internet broadcast.


On the day before the anniversary, there was a concert by Symcha Keller – a Jewish cantor and Hasidic scholar, entitled “Gates. Hassidic songs and prayers. ” Hasidic songs are always prayers, which is why the concert was above all the prayer for the victims of the pogrom.


The main celebrations this year were in the form of the March of Remembrance and Prayer, which began on July 4 at 15.30 at the monument of the “Menorah”, dedicated to the memory of the victims of the Kielce ghetto. After a short prayer with a psalm, prominent guests had speeches there. – Today we think about the victims. About martyrs. We – Catholics believe that martyrdom sanctifies. On July 4, 1946, Jewish Poles died a martyr’s death for believing that a better world is possible – said Bogdan Białek, president of the Association. Jan Karski. – I am not afraid to say that my father was saved from a pogrom by a Pole – said Jakub Kotlicki, whose father was in Kielce on July 4, 1946. Michał Sobelman, representing the Israeli Embassy in Poland, said that the memory of the Kielce pogrom became a warning that was invoked in situations when any persecution began due to its origin, no matter whether persecuted Jews, gypsies or followers of Islam. The chairman of the Jewish Community in Katowice, Włodzimierz Kac, said that his own person testifies to the scale of the 1946 tragedy: the chairman of the Jewish community in Katowice represents the community of Jews from Kielce who are no longer there. At the end, the Chief Rabbi of Poland, – We cannot change what was. But it is not only important to remember what was 72 years ago, but what Kielce does today with this memory. In our hands is how we are building Kielce today – said Michael Schudrich.
The ceremony at the tenement house at Planty 7, modeled the previous year, led the youth. First, a short introduction, said Adrian Adriański, a student at one of the Kielce secondary schools. Young people read the names of the dead, at the same time lighting candles at the stones of memory: tablets with the names of the victims who were before this year’s anniversary placed in the sidewalk in front of the tenement house. Next, the youth together with all participants of the ceremony sang the “Prayer at Sunrise”, a poem by Natan Tenenbaum, popularized in Poland by the performance of Jacek Kaczmarski. The March of Remembrance started towards the Jewish cemetery.

The ceremonies in the cemetery were of a prayer nature. Symcha Keller led the Jewish prayers for the dead, while Christian clergymen prayed with psalms in the following order Bishop Rafał Markowski, chairman of the Committee for Dialogue with Judaism of the Polish Episcopate, bishop of the Evangelical-Augsburg Church in Poland Jerzy Samiec, priest Michał Jabłoński, parish priest of the Evangelical Reformed Parish in Warsaw, priest Wojciech Rudkowski, parish priest of the Evangelical-Augsburg parish in Radom and Kielce priests: representing Bishop Jan Piotrowski, priest. Mirosław Cisowski and director of the Catholic Schools Jacek Kopeć.

The participants of the march could also see the effect of the work of the participants at the beginning of the summer workshops for young people “Młodzi rememberja”. In the windows of the tenement house at Planty 7/9 there are photos of places associated with the Kielce Jewish community, made by young people under the protection of Antoni Myśliwiec, a member of the Association of Polish Art Photographers. However, on the grave of Jewish children murdered on May 23, 1946, ceramic toy displays were made by participants of a ceramic workshop run by Mrs. Eliza Rajsz, a teacher of Art School in Kielce and an instructor in a ceramic workshop at the Grain Base.

In the evening, after the March, a concert organized in cooperation with Beit Warszawa took place at the Institute of Meeting and Dialogue Culture. Jewish songs, mainly in Yiddish, were sung by Cindy Paley – American cantor and music educator, and Menachem Mirski – member of the Klezmaholics band. The concert, which was also a prayer, was conducted by Rabbi Haim Dov Beliak. 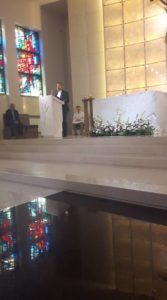 The Holy Mass in the Academic Church of St. John Paul II at Wesoła St. in Kielce ended the celebrations. In a short introduction, Bogdan Białek recalled the words of Bishop Kaczmarek, who directly wrote that there was a hate for Jews behind the Kielce pogrom. Rector of the church, priest Rafał Dudała, said in homily: – It’s a challenge: to break the heart and mind from the scheme of prejudices, from the stereotype of bad feelings, what the Gospel and the Church have long announced as evil, sinful, devilish -. After the liturgy, the prayers of Popes John Paul II and Franciszek for Jews were read, as well as the unusually moving text of the prayer of a deported Jew with an unknown name, found in the archives of one of the concentration camps.