3 October Service for refugees
A service for refugees was celebrated according to a tradition proposed by Sant’Egidio Community at
the John Paul II University Church in Wesoła Street in Kielce. Fr. Paweł Tambor, rector of the
Seminary in Kielce who also delivered a sermon, was the main celebrant. Fr. Mirosław Ciskowski,
representing the Bishop of Kielce, Fr. Rafał Dudała, chaplain of the university church and Janusz
Daszuta, pastor of Evangelical – Methodist Church in Kielce also took part in the service. At the end
of the service, a speech was delivered by Bogdan Białek, president of the Jan Karski Society.

5 October Meeting entitled ‘Is there a chance for peace in Syria?’
Our guests were Anna and Karol Wilczyńscy, journalists who visited Aleppo and Damascus and joined
in helping families suffering from the ongoing military conflict. They conducted a meeting on
refugees, the war in Syria and the migration crisis in Europe. 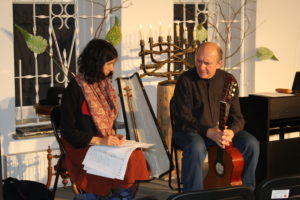 7 October Workshops entitled ‘What does my Facebook have to do with refugees?’
The workshop aimed at young people was conducted by Anna and Karol Wilczyńscy. Its main
objective was to develop tools which will help distinguish facts from manipulation and fake news,
spread deliberately.